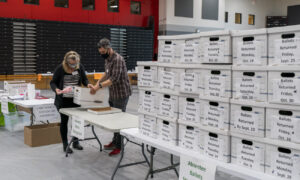 Two Wisconsin counties are being temporarily denied reimbursements by the Republican-led Wisconsin Legislature’s budget committee for their election recount costs, according to reports.

The Trump campaign paid $3 million for a partial recount in Milwaukee and Dane counties last month, which resulted in a gain of 87 votes for Democratic presidential candidate Biden, confirming his lead in the state count that is being contested by the campaign over alleged voting irregularities.

The campaign has alleged that there was widespread fraud and illegal activity in the state, and last week challenged the roughly 220,000 ballots recounted in the counties.

According to a letter shared on Twitter by Dane County Board Chair Analiese Eicher, two GOP lawmakers said on Dec. 11 that they were withholding the funds for last month’s recount, without elaborating.

Sen. Alberta Darling and Rep. Mark Born, a member of the legislature’s Joint Finance Committee objected to making the reimbursements, according to the letter, which did not elaborate on who on the 16-member committee objected or why.

“An objection has been raised to this request and a meeting of the Joint Committee on Finance will be scheduled. Therefore, the request is not approved at this time,” the letter said.

The letter did not specify when the meeting would be held.

Darling and Born did not immediately respond to requests for comment by The Epoch Times.

Responding to the reports, Eicher said on Twitter Friday that the costs should be reimbursed.

“Just learned that the Republicans are objecting to reimbursing Dane County for Donald Trump’s recount. Expenses were incurred. We did our job. Time to pay the bill. We’re not a contractor Trump and his allies in the WIGOP can stiff,” Eicher wrote.

Milwaukee County Clerk George Christenson told the Journal Sentinel that lawmakers “are playing politics with money that isn’t theirs,” accusing them of “acting in bad faith.”

“It’s not their money. It’s Trump’s money and this is what he decided to spend it on.”

Under state law, losing candidates can request recounts but must pay the cost upfront if they lost by more than 0.25 percentage points.

On Friday, the Wisconsin Supreme Court agreed to hear an appeal by the Trump campaign over a challenge to the partial recount. The court agreed to take the case hours after a circuit court judge sided with the defendants and affirmed the results of the election in the state.

The conservative-majority court set a hearing for noon on Saturday.

The Epoch Times won’t declare a winner of the 2020 presidential election until all results are certified and any legal challenges are resolved.

The Electoral College is scheduled to vote on Dec. 14 to decide the outcome of the race. The votes will be counted during the Jan. 6, 2021 Joint Session of Congress in Washington.