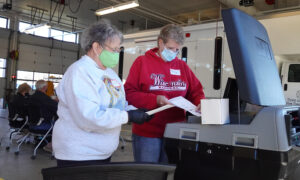 In a video reportedly from 2017, Dominion Director Eric Coomer demonstrates how Dominion’s voting machines and software works. One feature, he explains, is the ability to manually enter votes. A feature Dominion calls “adjudication.”

Coomer says this feature is meant to be used when a voter doesn’t mark the ballot correctly and the machine cannot read which candidate was selected.

If this happens, an operator can “adjudicate” the ballot. This means they manually select what candidate they think the voter meant to choose.

Despite Dominion’s reasoning for the feature, some people are raising concerns about how an operator could abuse it.

At a recent press conference, Attorney Sidney Powell brought up this feature when discussing allegations of election fraud against Dominion.

A Dominion brochure advertises that: “Ballot changes always preserve the voter’s original intent. Anyone reviewing a ballot will be able to see how the voter marked their ballot, how the scanner interpreted the intent, and how the ballot was adjudicated.”