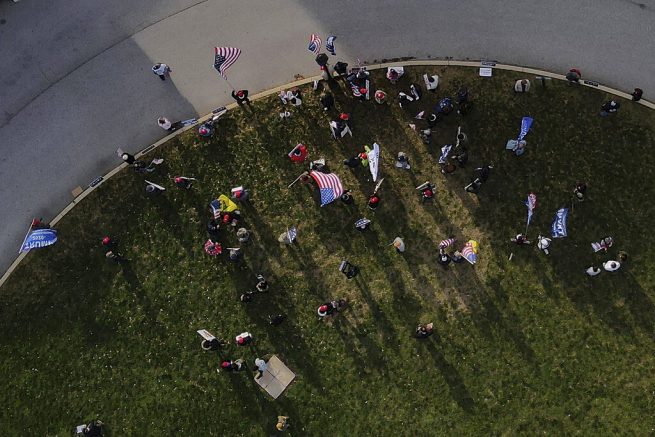 Supporters of President Donald Trump gather outside the Wyndham Hotel, where Rudy Giuliani, an attorney for the president, is speaking at a hearing of the Pennsylvania State Senate Majority Policy Committee, Wednesday, Nov. 25, 2020, in Gettysburg, Pa. (AP Photo/Julio Cortez)

Today, Twitter suspended him for no reason whatsoever after he led a committee hearing that featured the President of the United State @DougMastriano pic.twitter.com/VLjYf8GAZI

The ban came Wednesday after the Senate Majority Policy Committee convened with the goal of uncovering exactly what happened in the Keystone State.

“I mean, I don’t even know how this happened in America,” stated Mastriano. “We can send, 50 years ago, men to the moon, but we can’t have a safe secure election in Philadelphia and Pennsylvania? What’s going on here?”

The hearing included testimony from multiple witnesses who gave evidence of voter fraud in the 2020 elections with President Trump even delivering remarks via phone.

“Very sad to say it, this election was rigged and we can’t let that happen,” said the President. “We can’t let it happen for our country and this election has to be turned around, because we won Pennsylvania by a lot and we won all of these swing states by a lot.”

The President’s campaign has repeatedly fought to point out voting irregularities in the Keystone State. It has filed 16 suits that cited various instances of fraud, denial of access to Republican poll watchers, mail-in ballot issues and violation of equal protection clauses.

Mastriano slammed the hypocrisy of the left, stating Democrats were more concerned with upholding democracy on the other side of the world than they were in their own states.

“We move heaven and earth with American dollars to secure elections in Iraq and Afghanistan and elsewhere,” he noted. “We can’t do it in our own state? It’s by design.”