Trump Supporter: ‘We Are Not Putting Our Hope Into Man’ 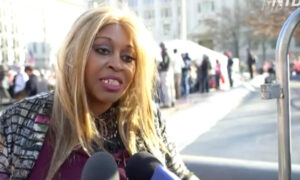 WASHINGTON—Linda Lee Tarver, president of the Republican Women’s Federation of Michigan, joined thousands who traveled from across the country to Washington in order to rally and march in support of the president, and to call on the government to ensure a fair election. But Tarver had zero doubts or worries that justice will prevail.

“I am not even wavering in my knowledge that God will allow our president to be re-elected. I am not even concerned about it. I’m not wavering about it, and let me tell you why. We are not putting our hope into man, not the justices, I put my faith and hope in God, and I know He can work out whatever he chooses,” Tarver said.

Many of the groups joining the rallies on Dec. 12 gathered through churches and Christian movements, and the protestors were vocal about their faith in the demonstrations.

“Religious liberty is important, it’s essential, and that is not a right that every country is offering. We have some countries persecuting Christians across the world,” Tarver added.

“At the end of the day, He is going to get the glory out of it, it will not be able to point to this person, that person did it,” she said. “God is going to get all the glory for that re-election. And it was a miracle in 2016 that he was elected; they considered our president a buffoon and he was the greatest, has been the greatest president that we have ever had in our country. He continues to negotiate peace deals, and will probably never see an award for that but he is not doing it for that.”

Tarver said that what the president has done to strengthen America has really been to the benefit of the world.

“We can see what happened to Venezuela when socialism reigned, and there’s no other country as great as ours. We have other countries who rely on us for our strength. So this is not just fighting for America, this is fighting for countries that have freedoms and liberties that we provide for. This is the greatest country that we have and it’s under the leadership of Donald J. Trump we have been allowed to thrive,” she said.