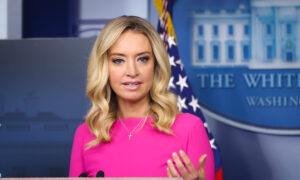 WASHINGTON—White House press secretary Kayleigh McEnany confirmed on Dec. 2 that President Donald Trump is serious about vetoing the National Defense Authorization Act if it doesn’t include a repeal of Section 230 protections for social media giants.

“Yes, the president is serious about it,” McEnany said when asked during a press briefing. A veto would block the $1.4 trillion omnibus spending bill, and if it’s not signed by Dec. 11, a stopgap measure is likely, but a government shutdown is also possible.

“If the very dangerous & unfair Section 230 is not completely terminated as part of the National Defense Authorization Act (NDAA), I will be forced to unequivocally VETO the Bill,” Trump wrote on Twitter on Dec. 1.

Section 230 of the Communications and Decency Act currently protects social media companies from liability for what their users post, because they’re not considered publishers.

“It’s essentially a shield that is given to social media networks because they claim to be the public square,” McEnany said.

Critics say tech giants such as Twitter and Facebook act as publishers when they censor certain users or topics and use fact checking labels on posts.

In recent months, several of the president’s posts have been hidden from public view unless a user clicks a warning label. McEnany, meanwhile, pointed to recent tweets from Chinese Communist Party officials spreading misinformation about the origins of the coronavirus, and from the leader of Iran calling for genocide against Israelis. Neither were flagged or blocked by Twitter.

“There are real grave concerns here,” McEnany said. “This is a very important issue—one that there’s even bipartisan agreement that something needs to be done. So the president will be unashamed in fighting against that kind of vitriol that we see, and very hateful language that Twitter is publishing.”

Rep. Adam Smith (D–Wash.), chairman of the House Armed Services Committee, released a statement on Dec. 2 along with ranking member Rep. Mac Thornberry (R-Texas), saying a bipartisan agreement has been reached for the fiscal 2021 NDAA.

Smith also took a swipe at Trump on Twitter, writing, “You’re willing to veto the defense bill over something that has everything to do with your ego, and nothing to do with defense.”

There are still questions about whether the NDAA will have the numbers to pass the Senate. Sen. Josh Hawley (R–Mo.), a longtime critic of censorship by Big Tech, said he can’t support the current bill, and not just over Section 230.

“The NDAA does NOT contain any reform to Section 230 but DOES contain [Sen.] Elizabeth Warren’s social engineering amendment to unilaterally rename bases & war memorials w/ no public input or process. I cannot support it,” Hawley wrote on Twitter on Dec. 2. “The NDAA should not be hijacked for the Democrats’ woke leftist agenda.”

Warren’s amendment stipulates that all names, symbols, displays, monuments, and paraphernalia that honor the Confederate States of America be removed no later than three years after the date of the enactment of the bill.

Trump said on June 30 that he would veto a defense bill should it contain the amendment.

“My Administration will not even consider the renaming of these Magnificent and Fabled Military Installations,” Trump wrote on Twitter in June.

McEnany confirmed on Dec. 2 that Trump is still “very much against the Warren Amendment—and public polling is with him on that.”

However, McEnany said she’s unsure if Trump would veto the current NDAA over the Warren amendment.

“It also is worth noting that the president will always defend our military and ensure that we get adequate defense funding, as he’s gotten $2.9 trillion so far. But he is going to put the pressure on Congress to step up on this,” she said.