Trump Says Kemp, Raffensperger Will Be to Blame If Republicans Lose Senate Runoffs 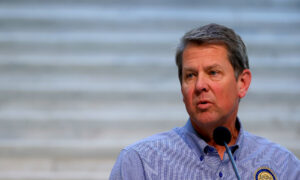 President Donald Trump on Monday said that Georgia’s Republican governor, lieutenant governor, and secretary of state will be to blame if the GOP loses two Senate runoff elections in January.

The officials “will be solely responsible for the potential loss of our two GREAT Senators from Georgia,” the president said, referring to Sen. Kelly Loeffler (R) and Sen. David Perdue (R).

“Won’t call a Special Session or check for Signature Verification! People are ANGRY!” the president said.

Earlier in the day, Trump said on Twitter that “the Republican Governor of Georgia refuses to do signature verification, which would give us an easy win. What’s wrong with this guy? What is he hiding?”

Kemp had called on Raffensperger to perform a signature audit on Dec. 5 but did not follow up on the comments with any executive action. Kemp made the remarks after the release of video footage that appears to show poll workers in Fulton County processing ballots in the middle of the night with no observers.

Kemp and Duncan had earlier on Monday rejected a request from Trump and four members of the Georgia Senate to convene a special legislative session.

“While we understand four members of the Georgia Senate are requesting the convening of a special session of the General Assembly, doing this in order to select a separate slate of presidential electors is not an option that is allowed under state or federal law,” Kemp said in a joint statement with Duncan.

The lawmakers and the president called for the special session in order to address a growing body of allegations pointing to potential voter fraud and election irregularities.

More than a million mail-in ballots have been requested for the upcoming Senate runoff elections in Georgia.

Approximately 1,037,172 absentee ballot applications have been entered into the voter registration systems, Gabriel Sterling, the state’s voting system implementation manager, told reporters at a press conference. Another 39,259 are pending. So far, some 43,000 voters have already returned their ballots and had them accepted on the county level.

Zachary Stieber and Juliet Song contributed to this report.