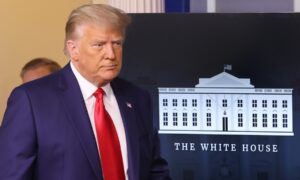 “HAPPY THANKSGIVING!,” the president wrote to his 88.8 million followers, with a quote from SCOTUSblog: “Just before midnight on the night before Thanksgiving, the Supreme Court blocked New York Gov. Andrew Cuomo from enforcing attendance limits at religious services. The vote is 5–4, with Roberts and the three liberals dissenting.”

The lawsuit was filed by the Roman Catholic Diocese of Brooklyn, which said that Cuomo’s executive actions that limited church attendance in an effort to slow the spread of the CCP (Chinese Communist Party) virus were unconstitutional.

Cuomo, in response, described the ruling as “irrelevant of any practical impact because of the zone they were talking about is moot.” He further stated: “It expired last week. It doesn’t have any practical effect,” according to the New York Post.

The Democratic governor didn’t issue a comment on the court’s ruling that his order was unconstitutional.

But the Supreme Court’s majority opinion stated (pdf): “Stemming the spread of COVID–19 [CCP virus] is unquestionably a compelling interest, but it is hard to see how the challenged regulations can be regarded as ‘narrowly tailored.’ They are far more restrictive than any COVID–related regulations that have previously come before the Court, much tighter than those adopted by many other jurisdictions hard-hit by the pandemic, and far more severe than has been shown to be required to prevent the spread of the virus at the applicants’ services.”

The five justices said they won’t tolerate violations of the Constitution’s First Amendment regarding freedom of religion.

“Members of this Court are not public health experts, and we should respect the judgment of those with special expertise and responsibility in this area. But even in a pandemic, the Constitution cannot be put away and forgotten,” the judges said. “The restrictions at issue here, by effectively barring many from attending religious services, strike at the very heart of the First Amendment’s guarantee of religious liberty.”

They added: “There can be no question that the challenged restrictions, if enforced, will cause irreparable harm. … If only 10 people are admitted to each service, the great majority of those who wish to attend Mass on Sunday or services in a synagogue on Shabbat will be barred.”

“Power-hungry Democrats like Cuomo have used the pandemic as an excuse to target people of faith with radical restrictions. It has no basis in science, and the Supreme Court agrees,” said House Republican Leader Kevin McCarthy (R-Calif.). “This is a win for religious liberty, and a reason to be thankful today!”