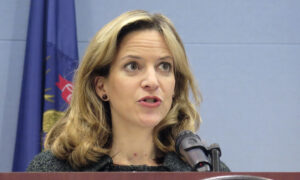 The Trump campaign on Monday asked the Michigan Supreme Court to review a legal challenge seeking “meaningful access” for poll challengers to observe ballot counting in the state.

Although Michigan had already certified its 2020 election results, the campaign is asking the state’s top court to declare that the Secretary of State, Jocelyn Benson, violated the state’s constitution and election laws by permitting the counting of absentee ballots without meaningful access for poll challengers to observe the counting and processing.

“Michigan citizens’ constitutional rights are being violated by Secretary Benson’s failure to prevent unlawful ballots to be processed and her failure to ensure that statutorily-authorized challengers have a meaningful opportunity to observe and challenge the process,” the campaign wrote in their brief.

The campaign is currently appealing a majority decision in the appeals court, arguing that they are still entitled to relief because electors do not meet until Dec. 14 and that the issues presented in the case are relevant to future elections.

They also pointed to Michigan Court of Appeals Judge Patrick Meter’s dissenting opinion, in which he said: “the issues are not moot because state electors have not yet been seated, the Electoral College has not yet been assembled, and Congress has not yet convened to consider whether to exercise its powers.”

The judge further added the campaign was entitled to declaratory relief on some of the issues.

Trump’s legal team initially filed this case on Nov. 4 seeking to halt the counting in the state “until meaningful access has been granted” to view the handling of absentee ballots.

The campaign claimed that Benson was allowing absentee ballots to be counted without teams of bipartisan observers as well as challengers.

Judge Cynthia Stephens held a hearing on the case the next day and denied the campaign’s request to stop the counting. She noted that Benson was not the right person to sue because she didn’t control the logistics of ballot counting, even as the chief election officer.

The campaign on Nov. 6 asked the Michigan Court of Appeals to review Stephens’s decision, but the court rejected the request in a 2-1 decision on Dec. 4. The team subsequently escalated the appeal to the state Supreme Court in hopes to overturn Stephen’s ruling.

The lawyers argued that the three administrative bodies that conduct the election report to Benson, who has supervisory control over election officials. Benson is also responsible for assuring Michigan’s local election officials conduct elections in a fair, just, and lawful manner, they argued.

“Secretary Benson is the official ultimately responsible for ensuring that challengers be permitted to meaningfully observe the canvassing process at all levels,” the lawyers wrote.

The lawyers also argued that Connarn’s affidavit was not hearsay as it was based on first-hand experience.

This comes after multiple witnesses and whistleblowers testified before the Michigan House Oversight Committee on Dec. 2, claiming instances of voter fraud and intimidation during the general election.

One of the witnesses, Hima Kolanagireddy, who was a Republican poll challenger at the TCF center, shared her experiences of being intimidated when she wore a tag indicating she was with the GOP.

“From my skin color, everyone assumes that I’m a Democrat. So they just kind of come to me and one of the ladies was saying, ‘Let’s get these m-f’s out.’ And I’m like m-fs who? … When I pulled out my tag, she looked at me and said, ‘You’re on the wrong side,’” Kolanagireddy said.