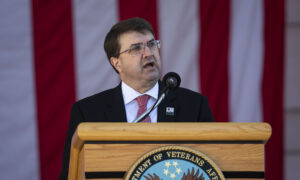 Top Democrats and veterans groups called on Veterans Affairs (VA) Secretary Robert Wilkie to resign, citing a watchdog report that alleged he had discredited a congressional aide who reported being sexually assaulted at a VA facility.

Hoyer blasted Wilkie in a statement on Sunday, saying, “There is an epidemic of harassment and violence against women who serve, and Secretary Wilkie has a duty to all Americans to work to address it.”

“Unfortunately, the inspector general’s report makes clear that Secretary Wilkie attacked the integrity of a victim of sexual assault and engaged in a cover-up that contributes to this crisis,” Hoyer added.

Pelosi said in a statement, “The VA inspector general report makes clear that Secretary Wilkie engaged in an extremely disturbing cover-up campaign of sexual assault against a veteran.” She said that Wilkie had been “derelict” in his duties and should resign.

Rep. Mark Takano (D-Calif.) has been advocating for his aide who filed the complaint and has been critical of the way Wilkie handled the aide’s complaint.

After the investigation into the complaint was closed with no charges being brought against the “contractor,” Wilkie shared his concerns about making “unsubstantiated” claims.

Wilkie wrote in a letter to Takano on Jan. 15, 2020, “We believe that VA is a safe place for all veterans to enter and receive care and services, but the unsubstantiated claims raised by you and your staff could deter our veterans from seeking the care they need and deserve.”

The watchdog report said the inspector general could not confirm allegations that Wilkie instructed officials to look into Takano’s aide.

The IG report states: “In his sworn OIG testimony, Secretary Wilkie denied investigating the veteran, questioning her credibility, or knowing whether she had made prior complaints. However, eight VA senior personnel told OIG investigators about discussions in Secretary Wilkie’s presence that involved the veteran’s purported history of filing complaints, whether specific to prior sexual assault allegations or similar issues during her military service.”

However, the IG’s report confirmed that the secretary took appropriate legal steps after the aide’s complaint was brought to his attention.

The report reads, “The following business day, Secretary Wilkie referred the matter to the OIG via email, writing, ‘I am asking that you investigate this very serious matter and make it an immediate priority for your team.’”

Veterans advocacy organizations including Disabled American Veterans (DAV) also called on Wilkie to step down after the report’s release.

In a statement Randy Reese, executive director of DAV’s Washington headquarters, wrote, “After thoroughly reviewing the report issued last week by the Department of Veterans’ Affairs Office of Inspector General, DAV no longer has confidence that Secretary Wilkie can effectively lead the department and calls for his immediate removal.”

Wilkie has said he did nothing wrong in handling the veteran’s complaint or the IG’s investigation and does not plan to step down.

A Department of Veterans Affairs spokeswoman told The Epoch Times in an emailed statement that Wilkie will continue to lead the VA.

In a statement regarding the IG report Wilkie said: “After nearly a year of investigation, interviews with 65 people and analysis of nearly 1.5 million documents, VA’s inspector general cannot substantiate that I sought to investigate or asked others to investigate the veteran. That’s because these allegations are false.”

“What’s more, the IG could not identify a single instance in which any VA employee violated any rule, regulation, or policy. If it had, it would have issued recommendations, which it did not.”