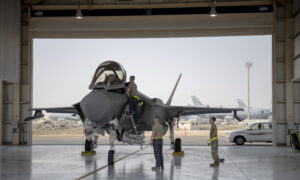 The two votes—that centered on the sale of 50 Lockheed F-35 aircraft, 18 General Atomics MQ-9B Reaper drones and Raytheon-made munitions—fell largely along party lines. The Senate voted 50-46 and 49-47, respectively, to stop consideration of the resolutions of disapproval seeking to block the sale.

The resolutions to block the sale were introduced by Sens. Robert Menendez (D-N.J.), Chris Murphy (D-Conn.), and Rand Paul (R-Ky.).

The Trump administration in November told Congress that it approved the sale of up to 50 F-35s worth $10.4 billion, up to 18 MQ-9B drones worth $2.97 billion, and a package of air-to-air and air-to-ground munitions worth $10 billion, to the UAE.

Several lawmakers have criticized the proposed sale, arguing that rushing the vetting of sales could accelerate an arms race in the region, and could jeopardize Israel’s security.

Opponents have also expressed concern that the arms sale might violate U.S. guarantees that Israel will retain a military advantage in the region. But Israel, which enjoys strong support in Congress, has said it does not object to the sales.

The White House said the sales support U.S. foreign policy and national security objectives by “enabling the UAE to deter increasing Iranian aggressive behavior and threats” in the wake of its recent peace deal with Israel.

White House officials have also said the UAE would purchase their weapons from Russia or China if not from the United States. The cutting-edge products are from U.S. companies General Atomics, Lockheed Martin Corp., and Raytheon Technologies Corp.

“This is not any kind of gift from the United States to the UAE,” Sen. Roy Blunt (R-Mo.) said ahead of the vote in a floor speech. “This is the UAE making a purchase totaling $23.5 billion dollars for equipment that is made by American companies and almost always by American workers.”

The Trump administration defended the proposed arms sale in a statement Wednesday, noting that Trump would veto the measures if they reach his desk. The sales “will not adversely affect” Israel’s “qualitative military edge” in the region, the statement said.

Senate Armed Services Committee Chairman Jim Inhofe (R-Okla.), a leading backer of the proposed weapons transfer, said on the Senate floor that the sale is supported by Israeli leaders.

Inhofe also noted the recent normalization of relations between Israel and the UAE as part of the Abraham Accords, which he described as one of the president’s “signature achievements and a major step forward in the Middle East.”

“The UAE is worthy of this sale because it is strongly aligned with the United States in the Middle East,” he said. “It is a vital counterterrorism partner. The UAE has fought alongside our troops in Afghanistan and against ISIS. It is also vital to U.S. efforts against Iran—both Iran’s ambition of regional dominance and its support for terrorist proxies.”