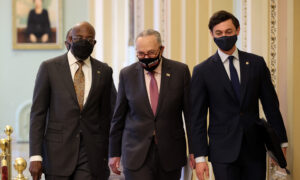 The Senate approved the $1.9 trillion COVID-19 stimulus package Saturday on a party-line vote.

All 50 Democrats voted for the relief bill while all Republicans but one absent voted against the bill.

The bill, also known as the American Rescue Plan or H.R. 1319, was passed by the House on Feb. 27 by a vote of 219–212, with all Republicans and two Democrats voting against it.

The Senate was able to pass the bill after several amendments. The bill will be returned to the House for reconciliation which is expected to happen early next week.

With 50 Democrats and 50 Republicans in the Senate, Vice President Kamala Harris is supposed to break the tie if the Senate votes on a party line. However, Sen. Dan Sullivan (R-Alaska) left Washington on Friday to his home state for a family funeral and enabled the Senate Democrats to pass the bill without help from Harris.

The House and Senate Republicans refused to vote for the stimulus package for various reasons. Republicans said the bill is not targeted, with only nine percent spending directly related to the CCP (Chinese Communist Party) virus pandemic, is infiltrated with leftists’ agenda, and is moved forward without nearly any input from the Republican side.

“Senate Democrats just managed to pass their bloated spending bill disguised as ‘COVID relief.’ This is the first COVID bill to be entirely partisan because it isn’t designed to help end the pandemic—it’s a blatant attempt from Dems to jam through a partisan wish list,” Sen. John Thune (R-S.D.), the Senate Republican Whip, wrote in a Twitter post after the passage of the relief bill.

“This boondoggle of a bill is a case study in the pitfalls of pure partisanship. Democrats set the record for the longest recorded vote in modern history because it wasn’t ready for primetime,” he added.

The White House appears to be satisfied with the stimulus bill as amended.

White House spokesperson Jen Psaki told reporters on Friday, before the passage of the bill, that the relief bill remains ‘incredibly progressive’ despite Senate compromises.

Tom Ozimek and Ivan Pentchoukov contributed to the report.