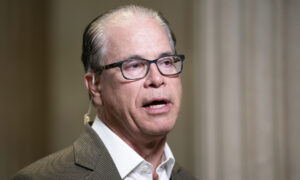 Sen. Mike Braun (R-Ind.) on Sunday said he supports the ongoing probes into alleged voter fraud in the Nov. 3 presidential election, saying that half of the country is “uncertain” about the election outcome and that legal processes must be allowed to play out.

Braun made the remarks during an appearance on ABC News’ “This Week,” which saw host George Stephanopoulos ask Braun why he isn’t accepting yet that Democratic presidential candidate Joe Biden beat President Donald Trump in the election, despite ongoing legal challenges nationwide.

Stephanopoulos noted that at least 38 of more than 50 lawsuits brought by Trump’s legal team and his allies, have been dismissed by judges in the lower courts.

“I think it’s easy to say it’s played out because that might be the most convenient thing to say,” Braun challenged back. “Whether we dismiss it, reflexively, whether we would find widespread fraud … there’s a wide gulf in between. And I think that when you just say that there’s nothing there, you’re going to have half of the country uncertain about what just happened and disgruntled going into the future.”

A number of states and news outlets have declared Biden the winner of the 2020 presidential election. The Epoch Times won’t declare a winner until all results are certified and any legal challenges are resolved.

While media outlets can make their own projections as to the winner of the election, state electors and the Electoral College are the bodies that are officially tasked with declaring a presidential winner. Each state has different deadlines for when officials must certify their election results, and the Electoral College votes on Dec. 14. The Joint Session of Congress will then read the votes on Jan. 6, 2021, which can be challenged. The president-elect is then sworn in on Jan. 20.

“Recounts are one thing, and we all know that they hardly ever change result of an election,” Braun said.

“Ballot integrity, a whole other issue, and from the get-go, there was a dialogue on recounts and people have certified all this stuff. That, to me, is dismissing some of the evidence, sworn testimony that’s out there, and if you don’t carry it to its conclusion, you’re going to have uneasiness going into the future.”

Attorney Sidney Powell, who has been seen working alongside Trump’s legal team pushing election challenges in several states, said on Friday that there is still plenty of time for the team to present evidence of voter fraud.

“All I can tell you,” Braun continued, “is if you don’t at least give a perfunctory kind of investigation into it, whether it’s Dec. 14 and what happens beyond, you’re going to have a good part of the country—it’s over 50 percent that view that something is amiss, and that’s going to carry forward in terms of undermining a democracy.”

In a Washington Examiner op-ed last week, Braun also accused media outlets of “fundamentally” failing the American people “by refusing to investigate any question about the integrity of widespread mail-in voting in the 2020 election and by dismissing all concern over documented election irregularities as conspiracy theories.”

“Asking questions about how unprecedented millions of mail-in ballots were verified and processed is not sour grapes over an election loss. I agree with President Trump that whomever is affirmed by the Electoral College should take office on January 20. But the broader issue of election integrity is at stake here,” he wrote.

Braun said that every eligible American needs to feel confident that his or her vote is being counted, and that election boards are only counting legally cast votes.

“We can only achieve this by vigorously investigating every hint of impropriety, which the media has declined to do,” he added. “If we do not turn over every stone in this election, there is little chance for the country to come together on anything.”