Republican Iowa US House Candidate Expected to Win by 6 Votes 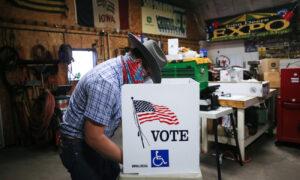 Miller-Meeks, in a statement on Saturday, noted that the race is “extraordinarily close,” adding she is proud and is looking forward to being declared and certified as the winner.

“While the race is extraordinarily close, I am proud to have won this contest and look forward to being certified as the winner by the state’s Executive Council on Monday,” Miller-Meeks said. “It is the honor of a lifetime to be elected to serve the people of eastern and southern Iowa.”

Hart has not conceded the race.

Should Miller-Meeks be certified as the winner, she would join nearly 20 other GOP women elected to the House of Representatives during the 2020 election.

Hart and Miller-Meeks ran to replace Rep. Dave Loebsack (D-Iowa), who is retiring.

According to the Iowa City Press-Citizen, a recount in Clinton County—part of the state’s 2nd District—provided a net gain of two votes for Hart.

“Unfortunately, as this process continues, the Miller-Meeks campaign has sought to keep legitimate votes from being counted—pushing to disqualify and limit the number of Iowans whose votes are counted,” he said. “We have said from the beginning of this recount process that the most important thing is that Iowans’ voices are heard and their votes are counted fairly. Moreover, under Iowa law, the recount was limited to the universe of ballots initially counted after Election Day. We will closely review what the county and state boards do on Monday with an eye toward making sure all Iowa voices are fully and fairly heard.”