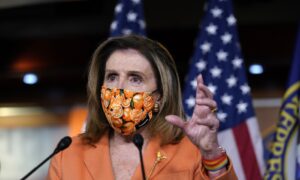 Under House rules adopted in 1996, members are required to wear traditional business attire—two- or three-piece suits or sport coats, and ties, and dress shirts.

But in a letter to Pelosi on Dec. 4, Banks pointed out that “on Dec. 3, 2020, the Speaker pro tempore, Rep. Henry Cuellar (D-Texas), wore a facemask that appeared to display his campaign logo while sitting in the Speakers’ chair. This is an obvious violation of the House’s prohibition on the use of official resources for campaign purposes.

“All members are disallowed from wearing campaign pins on the House floor, and this is no different. It also could be considered a violation of H. Res. 5, which prohibits the use of congressional broadcasts for partisan political purposes. You can find footage of Rep. Cuellar and his mask on C-SPAN.”

Banks told Pelosi that on the same day, “Rep. Earl Blumenauer (D-Ore.) wore a facemask covered in marijuana leaves on the House floor. Legality aside, it’s unbecoming for a House member to wear clothing that promotes the use of any recreational drugs on the House floor. It’s a clear violation of the House’s Code of Conduct, which prohibits all behavior that does not ‘reflect creditably on the House.’”

Banks told The Epoch Times on Dec. 7 that, “over the past year, the standards of decorum on the House floor went out the window. That happened on Nancy Pelosi’s watch, and I don’t see her doing much to make things better in her party. Ripping up the president’s speech and cutting the number of workdays in half doesn’t exactly set a high bar.”

Banks was referring to Pelosi standing during applause at the end of President Donald Trump’s State of the Union (SOTU) address in February and deliberately tearing up her copy of the speech.

He was also referring to the fact the House of Representatives has significantly reduced its official time in session during 2021 due to the CCP virus, which is also known as the novel coronavirus.

Buckley Carlson, a spokesman for Banks, said the congressman hasn’t received a response from Pelosi. The Speaker’s spokesman didn’t immediately respond to a request by The Epoch Times for comment.

Banks’ letter was directed to Pelosi, he said, because “whether or not members’ dress is appropriate is decided by the Speaker. In 2012, Speaker Boehner withdrew recognition from a member for not wearing proper attire and in 2001 Speaker Hastert admonished a member for engaging in debate without a jacket.

“Since then, it seems Congress’s standards of dress have been abandoned.”

The new flap sparked by the facemasks worn by Cuellar and Blumenauer follows controversy earlier this year when Pelosi, Senate Minority Leader Chuck Schumer (D-N.Y.), and nearly two dozen other Democratic members knelt in tribute to George Floyd while wearing stoles made of African Kente cloth.

Floyd died while in custody of the Minneapolis Police Department in an event that shocked the nation and was followed by several weeks of rioting and disorder in numerous cities around the country.

Pelosi, Schumer, and the others were criticized for politicizing the Kente cloth in a tweet that was subsequently taken down.

“My ancestors did not invent Kente cloth for them to be worn by publicity (obsessed) politicians as ‘activism’ in 2020,” said Jade Bentil, a Ghanaian-Nigerian researcher at University of Oxford, according to CNN.

Each of the Kente cloth’s colors are symbolic of characteristics. Gold, for example, stands for status, green for renewal, blue for purity, and red for passion.

Members of the Congressional Black Caucus have also worn Kente cloth apparel during presidential State of the Union addresses.