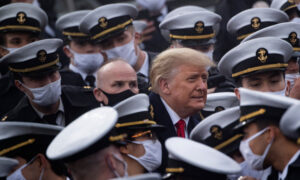 President Donald Trump signed an executive order that closes all federal agencies and departments for their employees on Christmas Eve.

“The heads of executive departments and agencies may determine that certain offices and installations of their organizations, or parts thereof, must remain open and that certain employees must report for duty on Dec. 24, 2020, for reasons of national security, defense, or other public need,” according to the text of the White House order on Dec. 11.

The order further stipulates that the director of the Office of Personnel Management “shall take such actions as may be necessary to implement” the measure.

Trump has been an advocate of celebrating Christmas, alleging that Democrats were waging a “war on Christmas.”

On Dec. 10, Trump also signed an executive order that provides “an order of succession” in the Department of Defense.

That order lists the order of succession of the military and Pentagon if the acting Secretary of Defense, Chris Miller, should be incapacitated in some way or if he resigns.

“Notwithstanding the provisions of this order, the president retains discretion, to the extent permitted by law, to depart from this order in designating an acting secretary,” the order says.