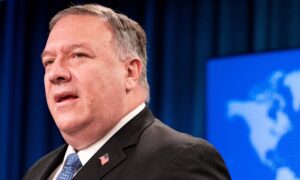 “On December 6, the illegitimate Maduro regime in Venezuela staged a political farce intended to look like legislative elections. Fortunately, few were fooled,” Pompeo said in a statement.

“The United States, along with numerous other democracies around the world, condemns this charade which failed to meet any minimum standard of credibility.”

“Although I cannot promise a magic solution today, I can tell you with certainty and security: You are not alone. We will not give up,” Guaidó said in a video message. “We are going to give everything until we win.”

Maduro claimed he won a second six-year term in the 2018 presidential election. The United States, the European Union, Lima, and the Organization of American States all rejected the election results, while China, Russia, and others recognized Maduro’s victory.

“Maduro brazenly rigged these elections in his favor through the illegal seizure of political parties’ names and ballot logos, manipulation of the process by his loyalist electoral council, violence and intimidation, and other undemocratic tactics.” Pompeo continued in his statement.

Pompeo declared that the United States would continue to recognize Interim President Guaidó and the legitimate National Assembly.

“Neither Maduro nor a new, fraudulently elected National Assembly will represent the legitimate voice of the Venezuelan people, which should be expressed through free and fair presidential elections,” Pompeo concluded.

Pompeo also wrote on Twitter that Venezuela’s election was “a fraud and a sham, not an election.”