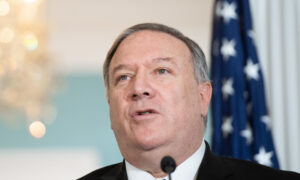 “I have a lot of respect for Jim, but he’s just dead wrong on that,” Pompeo told “Special Report” host Bret Baier on Nov. 24.

Mattis co-authored an article titled “Defense in Depth,” which was published in Foreign Affairs on Nov. 23. The article claimed that U.S. security depends on alliances more than ever before and asked to eliminate “America First” from future national security strategy.

“‘America first’ has meant ‘America alone.’ That has damaged the country’s ability to address problems before they reach U.S. territory and has thus compounded the danger emergent threats pose,” Mattis wrote in the article.

Pompeo said he takes “great umbrage” that “America first” means “America alone.” He said that “America First” recognizes that when America is secure and prosperous at home, then America will be a force of good for all.

“Pivot to Asia” was former President Obama’s controversial East Asia Strategy, representing a significant shift in the foreign policy of the United States. The strategy took the focus from the Middle East and the European sphere to East Asian countries.

In response to a comment made by Linda Thomas-Greenfield, Joe Biden’s pick for his Ambassador to the United Nations, that “multilateralism is back,” Pompeo said that multilateralism is not in the best interests of the values upheld and represented by the United States of America.

“We built a real Coalition. A coalition that crushed the caliphate in Syria, a coalition that’s pushed back against the Chinese Communist Party, a coalition that refuses to appease Iran,” Pompeo continued. “We develop Coalitions that actually deliver real results and reflect the reality on the ground.”

Pompeo confirmed that his team hasn’t communicated with Biden’s team about a potential transition. He simply said, “We will do everything that’s required by law. We will make this work.”

When asked about his greatest concerns if Biden took the White House, Pompeo said, “I know some of these folks, that they took a very different view. They lived in a bit of a fantasy world. They lead from behind. They appeased. I hope they’ll choose a different course.”

“I hope they’ll see the things that we have done, and how this has delivered greater peace in the Middle East, how its reduced risk from North Korea, where we took down what was a very tense situation when we came up into the office, whether it’s the central recognition of the Chinese Communist Party as a true threat to jobs all across America,” Pompeo added.

Pompeo made his comments after a diplomatic visit to Europe and the Middle East from Nov. 13 to Nov. 23.