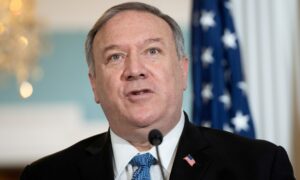 WASHINGTON/ANKARA—The U.S. Secretary of State Mike Pompeo said on Monday the United States has made clear to Turkey that its purchase of Russian S-400 missile defense systems would endanger the security of U.S. military technology and personnel.

Pompeo said he has urged Turkey to resolve the S-400 issue in co-ordination with the United States. But with Ankara rejecting all proposals, the United States announced sanctions on the country, which is a member of NATO—a military alliance formed to protect western Europe from the threat of Soviet Russia’s communist expansionist ambitions.

Turkey condemned the sanctions as a “grave mistake” and urged Washington to revise its “unjust decision.” It said sanctions would inevitably harm mutual relations and threatened unspecified retaliatory steps.

Senior U.S. officials said in a call with reporters that Ankara’s purchase of the S-400s and its refusal to reverse its decision, despite repeated pleas from Washington, left the United States with no other choice.

The measures were announced under the Countering America’s Adversaries Through Sanctions Act (CAATSA)—the first time the act has been used against a fellow member of the NATO military alliance.

Turkey‘s lira rallied about 1 percent as Washington opted not to adopt broader sanctions but analysts said the move was still likely to weigh on the Turkish economy, already in a coronavirus-induced slowdown and with double-digit inflation.

Ankara acquired the Russian S-400 ground-to-air defenses in mid-2019 and says they pose no threat to NATO allies. But Washington has long threatened sanctions and last year removed Turkey from an F-35 jet program.

“The United States made clear to Turkey at the highest levels and on numerous occasions that its purchase of the S-400 system would endanger the security of U.S. military technology and personnel and provide substantial funds to Russia’s defense sector,” U.S. Secretary of State Mike Pompeo said.

“This is not a step we’ve taken lightly or certainly quickly,” he said.

Turkey says it has repeatedly proposed forming a joint working group with NATO members to resolve the issue but its offers have not been fully utilised.

U.S. Assistant Secretary for International Security and Nonproliferation, Dr. Christopher Ford said that Turkey decided to move ahead with procurement and testing of the missile system “despite the risk of such sanctions and despite the availability of alternative NATO-interoperable systems to meet Turkey’s defense requirements which we have repeatedly offered to Turkey, and it has equally repeatedly refused.

“This decision left us no alternative but to act.”

They also impose restrictions on loans and credits by U.S. financial institutions to SSB totalling more than $10 million, while imposing asset freezes and visa restrictions on the SSB president and three other employees.

It is not immediately clear what impact the sanctions will have on third countries such as European states that supply arms or defence components and work with Turkish defence firms.

“Turkey‘s defence industry will be under stress for a while,” said Ozgur Unluhisarcikli, from the German Marshall Fund in Ankara. “Whether there is a secondary sanctions aspect or not, it will have a chilling effect on third countries as well.”

But he said the impact on the wider economy would be less severe and it was “very good that the uncertainty is being removed” after sanctions had loomed for so long.