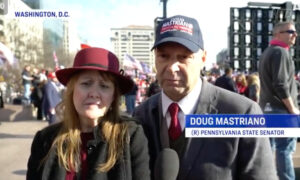 WASHINGTON—Republican Doug Mastriano, a Pennsylvania state senator who hosted the first public hearing regarding election integrity, joined in at the rallies and marches in Washington petitioning the government for fair elections and transparent counting, and called on his fellow Republicans to act with courage.

“I think the Republican Party as a whole, we need to have more courage. We need to start acting like winners and walk in victory. Even when we win we act like losers,” he said. “Maybe my 30 years in the Army has me in this mindset, but we need to press on, press forward. We are on the side of righteousness and we need to fight forward politically and not just capitulate and roll over.”

“Thank God, President Trump, he’s probably the toughest man that any of us know,” he said.

Thousands have gathered in similar grassroots protests took place every Saturday since the general election in capitals across the 50 states, and the Dec. 12, 2020 was expected to be the largest demonstration yet.

Mastriano told The Epoch Times that his office has heard from thousands of people across Pennsylvania about various election irregularities, such as being denied entry to polling places and being told that they mailed-in a ballot when they didn’t.

He said it was a huge blow that a Pennsylvania lawsuit was dismissed, but the fact that many state legislators signed up to back the suit is a sign “of courage rising.”

“Don’t be oppressed by these people on the left,” he said. “Ignore those fools. Walk in victory.”