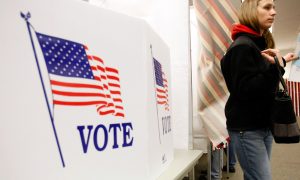 The state of Pennsylvania removed more than 20,000 deceased voters from being able to vote after a lawsuit that was settled by the Public Interest Legal Foundation, according to an announcement from a public interest group, which said it reached a settlement with Pennsylvania state officials this week.

The lawsuit (pdf) was filed in November and alleged that some 21,000 dead people were still on the state’s voter rolls during the 2020 presidential election. Pennsylvania agreed to compare its voter-registration database with the Social Security Death Index before removing the names from the rolls.

“This marks an important victory for the integrity of elections in Pennsylvania,” Public Interest Legal Foundation President and General Counsel J. Christian Adams said in a statement in announcing the court’s decision. “The Commonwealth’s failure to remove deceased registrants created a vast opportunity for voter fraud and abuse. It is important to not have dead voters active on the rolls for 5, 10, or even 20 years. This settlement fixes that.”

The lawsuit was filed after the Nov. 3 election and when then-candidate Joe Biden took a lead over then-President Donald Trump in Pennsylvania. Ultimately, the Pennsylvania Secretary of Commonwealth’s office certified the election.

The settlement stipulates that the “Department of State shall transmit to each county commission the names of the individuals registered in each respective county identified as deceased as a result of the comparison undertaken” with the “death data set received” from Electronic Registration Information Center that was then “compared to the full voter registration database … for the purpose of identifying persons who are ineligible to vote by reason of the registrant’s death.”

In response, the Pennsylvania Department of State said the agreement to remove the voters “includes no finding of inadequacy on the part of Pennsylvania and its counties,” according to the Washington Times. The Epoch Times contacted the agency for comment.

“The Department of State is pleased that this agreement will offer Pennsylvania’s county boards of election another valuable tool to maintain the most accurate and up-to-date voter rolls possible,” the Department added in a statement.

The settlement also says the Department of State pays $7,500 to the foundation to partially cover its attorney fees and other related costs.

The case was originally filed in the United States District Court for the Middle District of Pennsylvania with the case number No. 1:20-cv-01905.