Lessons From the Soviet Union, Communist China: Don’t ‘Wait Until It’s Too Late to Do Something’ 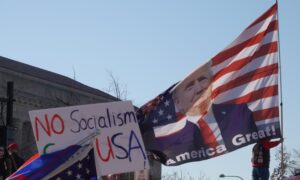 One of the speakers at the Washington “Stop the Steal” rally in support of President Trump on Saturday asked Americans to compare what is happening now in the United States with what happened in Russia. He said we can learn from these lessons of history.

Orthodox Christian leader George Michalopulos quoted the famous Soviet political prisoner, Aleksandr Solzhenitsyn, during his speech, “The simple step of a courageous individual is to not take part in the lie. One word of truth outweighs the world.”

He says Solzhenitsyn’s book, “The Gulag Archipelago,” is a lesson for us all—that we can’t wait until it’s too late to do something.

“The loss of our Republic is a manifest evil,” he told the rally. “Let it not be said that we did nothing, that we accepted the lies of the corporate media and wind up at our daily business, thinking that this too shall pass. This is America. Things like what happened in Russia cannot happen here.”

“The Gulag Archipelago was a symptom, an instrument of the worst repression in human history,” Michalopulos said. “And he [Solzhenitsyn] wrote that years later thinking, ‘Why didn’t we stop it when we had the chance?’ and that struck me.

“We have to stop it, this steal now, or else we will never have another free or fair election,” the faith leader said.

NTD also spoke to the prime minister of the East Turkistan government-in-exile, Salih Hudayar, who is an outspoken critic of the Chinese Communist Party and its persecution of Uyghurs—a minority ethnic group—in China’s Xinjiang province.