Jericho March, Atlanta: ‘This Is a Spiritual Battle’ 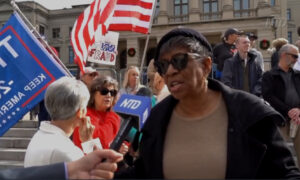 People came together in Atlanta, Georgia, on Saturday to participate in the “Jericho march,” calling for election integrity and transparency.

“We need to stand up for an accurate count of the votes,” said Charlotte Jarrett.

“We only get one vote a person. those ballots were fed into the system illegally, and it took my vote and my voice and and I want justice,” said Catherine Davis.

“I want truth to prevail in the election, I don’t want people to get away with the fraud, so, I’m out here praying, its our best defense,” said Joan Montjoy.

Marchers were disappointed about the supreme court rejecting the Texas lawsuit into voter fraud.

“I was heartsick about that. I believe God is still sovereign. I believe that he’s still working. Even if we can’t see it, he’s working.”

“I was very disappointed I don’t know who has standing in this country to challenge the laws, but I think I, as a black voter in Georgia, I have standing to challenge what happened here under the Voting Rights Act because it took my voice,” she added.

“I’m here to pray for our nation, appeal to heaven that God will intervene in the situation that’s going on. Pray against the fraud, pray for truth and righteousness to prevail,” said Joan Montjoy.

“I was counting ballots, I found three ballots printed out on copy paper—two for [Democratic candidate Joe] Biden, one for [President Donald] Trump—they stuck out like a sore thumb with bright white paper.”

Barry says the paper used for ballots is not white. They’re printed on a heavy stock cream color paper.

Chants of “USA!” could be heard as well as someone on a loudspeaker saying, “This is a battle, this is a spiritual battle.”

Calling it a “battle between good and evil,” marchers said they hope and pray that good will overcome evil in the end.

“I believe what God said that Trump would have a second term. So I just keep standing on that, in faith, and do everything that I can, which includes prayer, to come out and support this great nation,” said Joan Montjoy.

“By the grace of God, lord willing, i’ll be able to glorify Him. I’ll certainly do my best.”

The Jericho march takes place across seven U.S. cities. There will be a march everyday at noon until Dec. 14.