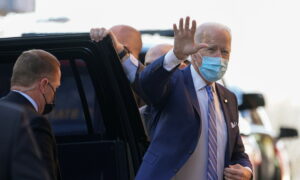 The New York Times opinion section published an op-ed by a Chinese Communist official entitled “Cooperative Competition Is Possible Between China and the U.S.”

In a piece explaining why they published the article, the outlet states that: “So far, this Op-Ed is the only official statement … that has come from the government about the election of Joe Biden to the presidency … There’s no denying that U.S.-China relations have been damaged over the past four years. [The Chinese official] is setting out the terms under which her government plans to work with a new Biden administration.”

Despite ongoing lawsuits challenging the election results and allegations of voter fraud, Biden has already picked his cabinet members. NTD will not call the race until all legal disputes are resolved.

Biden may or may not become the next U.S. president. But his potential cabinet members’ past actions and relations with communist China hint at what Biden’s China policy could look like.

Jake Sullivan is Biden’s pick for the national security adviser. He is a former senior official from Hilary Clinton’s state department.

During a June 2017 speech he gave at the Lowy Institute, Sullivan said the US should “encourage China’s rise” economically.  Sullivan called the containment of China “a self-defeating policy.”

In May of this year, Sullivan wrote in a Foreign Policy article he co-authored that “there is greater nuance in the (U.S.-China) relationship that combines increasingly sharp competition with a still-significant interdependence.”

During the pandemic, the U.S. suffered from its dependence on China’s drugs and personal protective equipment.

Some earlier news about Sullivan was also particularly concerning for Taiwan.

Beijing claims democratic Taiwan as its own territory and has never given up the idea of taking it over by force.

According to a personal email of Hillary Clinton’s leaked by WikiLeaks, Sullivan once shared an article to the then-U.S. secretary of state titled “To save our economy, ditch Taiwan.”

The email was sent with the title: “interesting article.”

Hilary’s replied, saying she “saw it and thought it was so clever,” adding: “Let’s discuss.”

Four years ago, the Trump administration broke precedence by accepting a direct phone call from Taiwanese President Tsai Ing-wen, who congratulated Trump on winning the election.

This year, Biden has called leaders of all major allies, but has not spoken to Taiwan.

Sullivan co-authored an article last October with another potential pick for Biden’s cabinet, Kurt Campell. The article, titled “Competition Without Catastrophe, How America Can Both Challenge and Coexist With China” argued that “On Taiwan, a tacit commitment not to unilaterally alter the status quo is perhaps the best that can be hoped for given the historical complexities.”

Pompeo announced this year that “Taiwan is not part of China,” regardless of Beijing’s anger.

Kurt Campbell served under Obama’s state department until 2013. After leaving office, he co-founded a consultant company The Asia Group, which offers business advice for companies who want to enter the Asian market.

In an article Campell wrote in August, he warned against treating China as the Soviet Union. He argued that “the right way forward will meld elements of a sustained commercial competition and military vigilance with necessary political dialogue and cooperation on global challenges. In other words, what Washington should seek to achieve is … a clear-eyed coexistence with Beijing in the military, economic, political and global governance domains that recognizes a competitive relationship need not be an adversarial one.”

Both Campell and Sullivan acknowledged the failure of the past engagement policy with China. Nonetheless, their attitude still reflects a softer stance, compared to Washington officials who support a tougher line against China.

Congressional Republicans published their China report this September, recommending that the Trump administration “clearly and publicly state an intention to break the CCP’s totalitarianism. … America’s goal must not be indefinite coexistence with a hostile Communist state, but rather, the end of the Party’s monopoly on power,” noting that “all policies should flow from this north star.”

Biden’s pick for the secretary of state is Tony Blinken. He, too, served under Obama’s state department.

A scholar from the Australian Strategic Policy Institute wrote that “Blinken seems to have developed a stronger appetite for competition than other Obama-era figures, but wants to work with Beijing to ensure that these competitive dynamics don’t escalate into confrontation.”

Blinken said back in September that it’s unrealistic for the United States to “fully decouple” from China.

Calling it “ultimately counterproductive,” and saying it “would be a mistake.”

He said the United States should counter China by joining the Trans-Pacific Trade Partnership, a trade pact with Asian countries. And one that Chinese Communist leader Xi Jinping said China is considering joining.

Another Biden cabinet candidate that has some Asian countries concerned is Susan Rice.

Bilahari Kausikan, a former Singapore diplomat who was deemed a mouth-piece for the Singaporean Foreign Policy establishment, wrote earlier this year that: “Susan Rice would be a disaster. She has very little interest in Asia, no stomach for competition, and thinks of foreign policy as humanitarian intervention.”

The former official added that Rice “was among those who thought that the U.S. should deemphasize competition to get China’s cooperation on climate change, which is a fundamental misunderstanding of the nature of international relations.”

He also asserted that the United States “will look back on Trump with nostalgia.”

Biden’s nomination for the Department of Homeland Security is Alejandro Mayorkasfor.

U.S. Senator Tom Cotton (R-Ariz.) said of Mayorkasfor: “He was found by Barack Obama’s Inspector General to be guilty of selling Green Cards to Chinese nationals on behalf of rich, democratic donors. Think about that, selling citizenship to well-connected Chinese nationals on behalf of democratic party donors. That is disqualifying to lead the department of homeland security.”

One of the Chinese nationals who tried to seek a visa was a vice president of Huawei, a Chinese tech giant that helps Iran evade U.S. sanctions and develops technologies used by the regime to persecute ethnic minorities.

A DHS investigation found that Mayorkas allegedly assisted with the approval of an application for the visa on behalf of Gulf Coast Funds, an investment in a company whose CEO was Hillary Clinton’s brother, Tony Clinton. The visa was later denied.

Most of Biden’s picks are Obama-era officials. The Australian Strategic Policy Institute wrote that “for countries in the Indo-Pacific that are living under the shadow of an increasingly aggressive Beijing, reviving the Obama administration’s overly cautious approach would be a bad outcome.”

It continued that “America can’t just lead by the power of its example. It also needs to lead by the example of its power.”