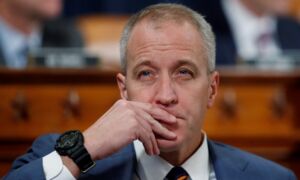 WASHINGTON—House Democrats elected centrist Rep. Sean Patrick Maloney on Thursday to lead their campaign arm into the 2022 elections, picking a lawmaker who wins in a closely divided district as they dissect why they unexpectedly lost seats in November’s voting.

Maloney, 54 and openly gay, defeated Rep. Tony Cardenas (D-Calif.) by 119-107, according to a person familiar with a vote held virtually because of the pandemic. Cardenas, 57, has been leader of BOLD PAC, the fundraising organization for the Congressional Hispanic Caucus.

Thursday’s close election for the post underscores Democratic uncertainty over why they lost at least a dozen incumbents in last month’s voting, despite widespread expectations that they would gain perhaps 15 seats. No House Republican lost. The outgoing chairwoman, Rep. Cheri Bustos (D-Ill.), left the job shortly after Election Day.

Progressives have blamed the party’s poor performance on inadequate digital campaigning, while moderates have faulted liberals for leaving Democrats vulnerable to GOP charges that they are all socialists who support defunding the police. The party’s candidates also performed more weakly than expected with moderates in suburban districts and Hispanic voters, especially in South Florida.

“I will work every day to improve our campaign operations, connect with voters across lines of difference, protect our incumbents, and expand our majority,” Maloney said in a statement after his victory.

Also Thursday, Democrats elected Rep. Rosa DeLauro (D-Conn.) to chair the House Appropriations Committee. DeLauro is a 30-year House veteran who’s long been on the Appropriations panel, which controls around $1.4 trillion in spending, a hefty chunk of the federal budget.

Maloney has been elected five times from a district in New York’s mid-Hudson valley that President Donald Trump carried narrowly in the 2016 presidential election. While campaigning for his new post, Maloney touted his ability to win in a competitive district, his fundraising connections, and a five-month study he led of the campaign committee’s 2016 performance that resulted in structural changes.

“I did all this as a married gay man with an interracial family—the first, and until 2020 only, openly LGBTQ person ever elected to Congress in New York,” he wrote in a letter to colleagues. He added, “I know what it means to develop relationships with voters across lines of difference because I do it every day.”

Maloney was reelected in November by a comfortable 11 percentage points.

Democrats are assured of controlling the House again in the new Congress that convenes in January 2021. But with a handful of races still uncalled, their edge over the GOP currently stands at 222-208, and they’re likely to have the chamber’s narrowest majority in two decades.

Democrats went into November’s elections with a 232-197 House majority, along with an independent and five vacancies.