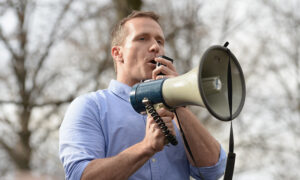 Former Republican Missouri Gov. Eric Greitens committed to taking a hard line against the Chinese Communist Party (CCP) if he is elected to represent the Show-Me state in the U.S. Senate in 2022.

Greitens told The Epoch Times that the CCP should be held accountable for covering up the origins of the CCP virus, commonly known as the coronavirus, and abetting the global spread of the disease. The former governor pledged to stand up to the communist regime’s ongoing persecution of faith groups, including tens of millions of Uyghur Muslims and Falun Gong practitioners.

“We need to tell the truth about how the Chinese Communist Party are suppressing, imprisoning, and often murdering people within China.”

The administration of President Donald Trump took an unprecedented, assertive, and principled stand against the CCP, going all-in on a trade war to punish the regime for unfair trade practices and the rampant theft of intellectual property. In the waning days of Trump’s tenure, the State Department for the first time ever sanctioned CCP officials over the persecution of Falun Gong, a traditional spiritual practice based on the tenets of truth, compassion, and tolerance. Secretary of State Mike Pompeo also took the unprecedented step of declaring the abuses against the Uyghurs in Xinjiang a genocide.

Greitens fully affirmed Trump’s approach to China and vowed to fight for Trump’s America-First agenda in the Senate.

“We need to recognize that the Chinese Communist Party is responsible for more murders than any other organization in the history of the planet,” Greitens said, referring to estimates that the CCP’s policies have directly or indirectly led to the deaths of tens of millions of people.

‘A Real Taste’ of CCP Suppression

Greitens said his experience with the oppressive communist regime is a personal one. As a college student, on the first overseas trip of his life, Greitens picked China as the destination for a travel grant he was awarded by his school. He eventually took on a job teaching English at a state-owned company, and, having no experience with teaching language or with the CCP’s crackdowns on freedom of speech, prompted his students to engage in an open discussion.

“The first questions that were asked to me were about freedom of speech, freedom of assembly,” Greitens said. “For many of them, I was the first foreigner who they had talked with about the experience that they had lived through.”

The free-form forum went on for several days until the police showed up at his dorm.

“One Friday night, I’m playing darts in a dormitory with some of my friends and two Chinese police officers showed up at the door. And they told me that I had to go to the police station,” Greitens said. “I ended up being taken and interrogated for several hours.”

The officers asked him about which students brought up the Constitution, freedom of speech, and how he got the teaching job.

“I had, on my very first experience overseas, a real taste of what the Chinese Communist Party’s suppression looks and feels like,” Greitens said.

On more than one occasion, Trump had hinted that he was planning to hold the communist regime in China responsible for the coverup of the outbreak of the CCP virus and for abetting its spread around the world. Chinese authorities had prohibited people in China from entering or leaving Wuhan, where the first cases of the virus were reported, but placed no restrictions on international flights in and out of the city.

Greitens said the CCP should “absolutely” be held responsible for the pandemic.

“I often call it the CCP virus. They need to be held accountable for it. Even though the mainstream media often doesn’t want to report this, the facts are that the Chinese Communist Party has to this day not been transparent about the origins of the virus,” Greitens said.

“The Chinese Communist Party is responsible because they hid information about the virus early on [and] for its rapid rise and spread across the world.”

Greitens resigned from the governorship of Missouri amid an investigation into an allegation stemming from his extramarital affair. The state’s legislature had initiated impeachment proceedings not long before he announced his exit.

All of the charges against Greitens have since been dropped. The prosecutor in the case, Kim Gardner, was elected with backing by liberal billionaire activist George Soros. Gardner’s conduct in the case is now under investigation while her lead investigator is facing seven felony charges, including evidence tampering and perjury, in connection to the Greitens case.

The case bears resemblance to the Russia-collusion investigation of Trump, which whipped up a media frenzy for three years only to conclude with a complete exoneration of the president.

Despite the flood of negative stories before his vindication, Greitens remains popular among Republicans in Missouri, according to a survey of 400 GOP primary voters conducted by Trump pollsters Tony Fabrizio, David Lee, and Travis Tunis. Greitens leads the Republican field in the Senate race with 48 percent of the vote, according to the internal poll obtained by The Hill. State Attorney General Eric Schmitt received 11 percent of the vote; Rep. Ann Wagner (R-Mo.) and Rep. Jason Smith (R-Mo.) pulled 9 and 7 percent of the vote respectively.