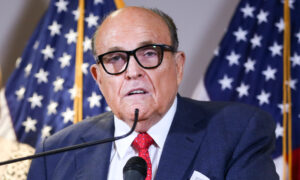 Former New York Mayor Rudy Giuliani on Sunday said that he is “recovering quickly” and thanked his well-wishers following a positive diagnosis of the CCP Virus.

“Thank you to all my friends and followers for all the prayers and kind wishes. I’m getting great care and feeling good. Recovering quickly and keeping up with everything,” the lawyer said in a post on social media.

President Donald Trump earlier on Sunday announced the news that Giuliani had contracted the Chinese Communist Party (CCP) virus, which has devastated the United States and other counties around the world. The president didn’t comment on Giuliani’s health but wished the 76-year-old well.

Giuliani, who is spearheading the Trump campaign’s legal efforts to ensure election integrity, had tested negative for the virus immediately preceding his trips to Arizona, Michigan, and Georgia, according to the Trump legal team. He had traveled to those states to conduct hearings with state legislators over allegations of election fraud.

The Trump legal team also said the mayor did not experience any signs or symptoms, or test positive for the virus until more than 48 hours after his return.

“No legislators in any state or members of the press are on the contact tracing list, under current CDC Guidelines,” the team added.

They said members of the legal team who had “close contact” with Giuliani are now following doctors’ and health official guidelines on self-isolation and testing.

Earlier on Dec. 6, Giuliani was interviewed by Fox News’ Maria Bartiromo and didn’t appear to show any symptoms of the virus.

On the program, Giuliani made reference to the State Farm Arena surveillance video in Atlanta, which showed election officials pulling black containers on wheels out from underneath a table after poll observers and election workers were sent home. State election officials have said the process wasn’t unusual but didn’t answer key questions raised by Trump’s team when they commented on the video at a hearing in the Georgia Legislature.

This comes after Giuliani’s son, Andrew Giuliani, who currently serves as a special assistant to President Donald Trump, tested positive for the virus last month. The younger Giuliani wrote on Twitter saying that he was “experiencing mild symptoms” of the disease caused by the CCP virus and was “following all appropriate protocols,” such as quarantine and conducting contact tracing.

The Centers for Disease Control and Prevention (CDC) recommends people wear cloth face coverings in public settings and when around people who they do not live with, in order to prevent the spread of the virus.