Giuliani Denies Report He Talked About Pardon With Trump 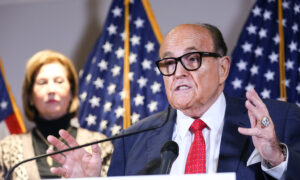 Former Mayor Rudy Giuliani, an attorney for President Donald Trump, denied a report that claimed he is seeking a pardon from the president.

“#FakeNews NYT lies again,” Giuliani wrote in reference to a New York Times article on Tuesday alleging that the former mayor talked about a preemptive pardon with Trump in recent days.

The NY Times cited anonymous sources, including “two people” who were “told of the discussion,” as well as “people who have spoken to him.”

Giuliani, in his Twitter post, said he “never had the discussion they falsely attribute to an anonymous source. Hard to keep up with all their lies.”

Giuliani hasn’t been charged with any crimes but has drawn criticism for his alleged dealings in Ukraine on behalf of Trump. Those allegations were brought up during last year’s House impeachment inquiry.

The former New York City mayor’s lawyer, Robert Costello, told the paper that Giuliani isn’t worried about an investigation by the U.S. Attorney’s Office for the Southern District of New York “because he didn’t do anything wrong, and that’s been our position from Day 1.”

Giuliani is scheduled to appear in a hearing in front of the Michigan State House on Wednesday, according to state House Speaker Lee Chatfield, a Republican. There, he’ll presumably offer his testimony about election fraud during the Nov. 3 presidential election.