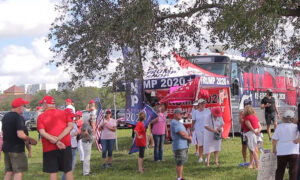 A group of Trump supporters kicked off a bus tour in Florida on Sunday. Called “March for Trump,” the group plans to show their support for the president by traveling to 18 states, including battleground states like Georgia and Pennsylvania. One of the event organizers, Amy Kremer, said the presidential race is not over.

The mobile rally began in south Florida in Doral close to the president’s part-time residence and club Mar-a-Lago.

The intention is to tour the country before ending with a massive march for Trump in Washington, on Saturday, December 12th.

Amy Kremer, Chairwoman, Women for America First said: “Regardless of what the mainstream media and the Democrats would like you to believe it’s not over. The people choose the President of the United States, not the media. And we’re mad as hell about it. They have for four years they’ve tried to overthrow this president, and now they are trying to steal an election and we’re not going to stand for it. And so we are taking to the streets.”

A veteran at the kickoff said having a fair election transcends political parties: “Whether you’re Republican or Democrat has nothing to do with it. What has to do with that is that your vote may not have counted … this election may have been taken away.”

Like many here, he thinks there should be an investigation to find out whether there was any election fraud.

“I take my right to vote very seriously. And to think for one minute that my vote may have been absconded by cheating in the ballot machines and people behind those machines, it scares me.”

A business owner from Florida is in one of the “Stop the Steal” rallies on Facebook, she believes she’s censored.

“Do we live in Communist China? I know they want us to. That’s what’s going to happen if [presidential candidate Joe] Biden takes over. … We’re not gonna let it happen.”

Also at the kickoff is a Floridian who immigrated from China over two decades ago, she said she stands for Trump because she wants to deter the influence of communism in the United States.