Fauci Got Criticized for Flipping Stance on School Opening 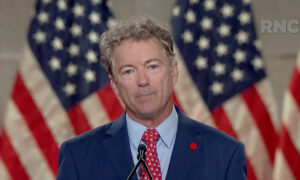 Sen. Rand Paul (R-Ky.), took to Twitter on Nov. 29 and said that Dr. Anthony Fauci owes an apology to “every single parent and school-age child in America.”

Dr. Fauci, director of the National Institute of Allergy and Infectious Diseases, told ABC earlier that day that “let’s try to get the kids back [to school],” changing his long-time stance that schools should be closed.

“If you look at the data, the spread among children and from children is not really very big at all, not like one would have suspected,” Fauci explained to Martha Raddatz during the interview.

“I think this illustrates the danger of centralizing power and decision making in one person or in Washington, because when one person is so wrong, as Dr. Fauci has been, it has grave effects for millions of schoolchildren,” Paul told Fox News on Tuesday morning.

“The evidence has been clear for six months, evidence from entire countries in Europe and in Asia, that schools do not lead to a surge, that kids are poor transmitters of this. Country-wide studies were showing this six months ago, and he wouldn’t listen.”

Paul once notably disputed with Fauci on school reopening in May in a Senate hearing.

“We can listen to your advice, but there are people on the other side that are saying ‘There’s not going to be a surge and we can safely open the economy.’ The facts will bear this out,” Paul said during Fauci’s testimony to the Senate Health, Education, Labor, and Pensions Committee in May.

“We don’t know everything about this virus,” Fauci said at the time. “And we’d really better be very careful, particularly when it comes to children.”

“I think we’d better be careful that we are not cavalier in thinking that children are completely immune to the deleterious effects,” he said.

“Sixty million American children have been languishing in their rooms since spring, sitting in front of screens, learning nothing, isolated from human contact, in many cases driven to mental illness–and there was no reason for any of that.”

“The experts were wrong,” Carlson continued, “They had no idea what they were doing. But the most amazing part is that they knew they were wrong when they did it, but they kept lying about it, even as American children began to kill themselves.”

Carlson also criticized the media for having been ignoring the facts and echoing with Fauci for keeping schools closed.

Carlson suggested that the reason behind it is President Donald Trump. Because Trump agreed with doctors and called for schools to reopen, therefore the media ignored it.

Paul, who himself is also a physician, also expressed his doubt on the lockdown mandates in his interview with Fox News Tuesday morning.

“We should also look at the evidence on that, do lockdowns prevent the spread of this? Right now we have more mandates and more lockdowns than we’ve ever had. And yet the incidence of COVID is rising exponentially.”

Tom Ozimek contributed to this report.