Electoral College to Meet Monday to Cast Votes for President 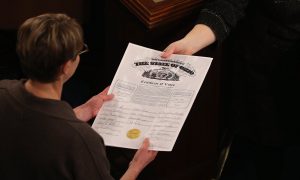 Members of the Electoral College are due to convene in states across the country on Monday, casting votes for the next U.S. president.

The state-by-state votes, traditionally an afterthought, have taken on outsized significance this year in light of President Donald Trump’s challenges of the 2020 election, with the president and his allies filing multiple lawsuits amid claims of irregularities and fraudulent activity.

Trump on Sunday doubled down on his resolve to challenge the results of the election, a day before 538 presidential electors are scheduled to meet and cast their ballots.

“Swing States that have found massive VOTER FRAUD, which is all of them, CANNOT LEGALLY CERTIFY these votes as complete & correct without committing a severely punishable crime,” Trump wrote in a series of posts on Twitter.

The president listed the types of election fraud he believes allegedly occurred in a number of contested states including Michigan, Pennsylvania, Wisconsin, and Georgia.

“In all Swing State cases, there are far more votes than are necessary to win the State, and the Election itself. Therefore, VOTES CANNOT BE CERTIFIED. THIS ELECTION IS UNDER PROTEST!” he added.

The winner of the presidential election in the United States is determined not by the popular vote but through the Electoral College system, which is mandated in the Constitution and allots “electoral votes” to states and the District of Columbia largely based on their population.

In order for a candidate to win the presidency, they must secure at least 270 Electoral College votes. To date, certified election results show Democrat Joe Biden with 306 votes, compared to Trump’s 232. However, it is theoretically possible for electors to cast votes for a different candidate to which they are pledged. Thirty-two states and the District of Columbia have laws intended to control rogue electors, or “faithless electors.” Some provide a financial penalty for a rogue vote, while others call for the vote to be canceled and the elector replaced.

In light of claims of election fraud, Trump has called on Republican state legislators to appoint their own electors.

The votes cast on Monday will be sent to Congress to be officially counted on Jan. 6, the final stage of the election process. Once the Electoral College vote is complete, one of the last avenues for a potential Trump victory would be to convince Congress not to certify the count, paving the way for House lawmakers to cast votes for president and those in the Senate for vice president. Under such a scenario, each state gets one vote, with the GOP having a majority in each chamber.

Federal law allows individual lawmakers to challenge states’ electoral votes, which prompts both the House of Representatives and the Senate to debate the objections before voting on whether to sustain them.

Rep. Mo Brooks (R-Ala.) has vowed to file challenges when Congress reviews the vote next month.

Attention on Jan. 6 is sure to be focused on Vice President Mike Pence, who will be in charge of tallying the Electoral College votes and overseeing any objections.

If objections are filed, each chamber would have two hours to debate the matter, and for the Electoral College votes to be rejected, the Democratic-controlled House and the Republican-controlled Senate would have to agree.