Director of National Intelligence: Election ‘Issues’ Need to Be Resolved Before Winner Declared 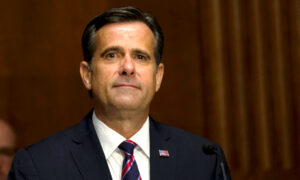 The top U.S. intelligence official suggested on Sunday that election lawsuits and other issues need to be resolved first before the winner of the Nov. 3 presidential election is declared.

Director of National Intelligence John Ratcliffe told Fox Business that issues brought up by President Donald Trump’s legal team have to be heard in court.

“These election issues, we’ll see who is in what seats and whether there is a Biden administration,” he told the broadcaster.

Ratcliffe said that due to the unprecedented expansion of mail-in voting, many questions remain about the results.

“Essentially we had universal mail-in balloting across this country in a way we hadn’t seen before, and to that point, almost 73 percent of the American people this year voted before Election Day, a good percentage of those by mail,” he said.

“That’s about an 80 percent increase over anything we’ve ever seen before, so it’s little wonder that we see what’s happening around the country as a result of that, with mail-in balloting and all of the questions—and the questions that are being raised in lawsuits and by everyday Americans about what happened in the election,” Ratcliffe said.

In the interview Sunday, Ratcliffe made note of allegations that were brought up in recent days, including a truck driver who claimed to have transported hundreds of thousands of apparently completed mail-in ballots from a town in Long Island, New York, to Pennsylvania. He also referred to recent footage obtained by Trump’s team that shows election workers pulling out black, suitcase-like ballot containers from beneath a table after poll observers and other election workers were apparently told to go home for the night at the State Farm Arena in Atlanta.

“But people need to understand that’s different than election fraud issues—things like postal drivers saying they took 200,000-plus ballots from New York to Pennsylvania. Tens of thousands of ballots supposedly mailed in, but no folds or creases in them. More votes than ballots issued in places,” the intelligence chief said. “People pulling out suitcases and video evidence of that with questionable explanations for that. Those are issues of election fraud that need to be investigated and there’s a lot of them and it’s not just one person or one group of people. It’s across the country.”

Georgia election officials said the video showing containers being pulled from the table is not unusual, while Trump’s team said it is evidence of fraud. Officials in Fulton County, Georgia, and election officials have provided conflicting accounts of what happened on the night of Nov. 3, with one Fulton County spokesperson, Regina Waller, telling ABC News and other outlets at 11:30 p.m. on Election Night that vote counting was done for the night.

Later that week, other Fulton County officials confirmed that counting had continued for several hours longer. Georgia’s Republican Party chief, David Shafer, has said that poll observers were not present during this time period.

As a result, Ratcliffe said numerous Americans don’t believe “the votes were counted fairly, that the processes at the state and local level weren’t administered fairly.”