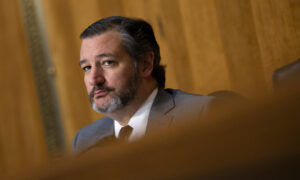 Sen. Ted Cruz (R-Texas) expressed disappointment that the U.S. Supreme Court has chosen not to hear a case brought by Pennsylvania Republicans challenging the election results in the state.

“I’m disappointed the Court decided not to hear the case challenging the election results in PA,” Cruz said in a statement on Twitter. “This appeal filed raised important & serious legal issues, & I believe the Court had a responsibility to ensure our elections follow the law & the Constitution.”

The U.S. Supreme Court on Tuesday rejected a request for injunctive relief filed by Pennsylvania lawmakers and candidates contesting the election results in the commonwealth. In the order (pdf), the nation’s top court denied the emergency appeal that asked the court to block the state from taking further steps to certify the 2020 election results.

“The application for injunctive relief presented to Justice Alito and by him referred to the Court is denied,” said the court’s single-sentence order, which did not note any dissenting opinions nor did it provide further explanation.

Rep. Mike Kelly (R-Pa.), along with several others, initially filed a lawsuit on Nov. 21 requesting Pennsylvania either reject some 2.5 million mail-in ballots or allow the state legislature to appoint presidential electors. The Pennsylvania Supreme Court dismissed the lawsuit on Nov. 28, essentially arguing that it was brought too late, prompting an appeal to the U.S. Supreme Court, which was rejected on Tuesday.

Cruz, who offered to argue the case before the high court if it were to be taken up, said in his Dec. 9 statement that the election has caused “anger and division” throughout the country and that the Pennsylvania state legislature violated its own constitution in expanding mail-in balloting.

“The anger and division we see across the nation needs resolution,” Cruz said. “Late last year, the Pennsylvania Legislature passed a law that purported to allow universal mail-in voting, notwithstanding the Pennsylvania Constitution’s express prohibition.”

Kelly, in his filing, made a similar argument, claiming that, “Pennsylvania’s General Assembly exceeded its powers by unconstitutionally allowing no-excuse absentee voting, including for federal offices, in the election.”

The case centered around a piece of legislation that erased the requirement for people voting by mail to have a reason why they couldn’t vote in person, with plaintiffs arguing the law was implemented illegally.

A Pennsylvania judge last month said the plaintiffs would likely succeed and blocked the state from certifying the results of the election, but the Pennsylvania Supreme Court struck down the injunction days later, leading to the showdown before the U.S. Supreme Court.

Kelly’s lawyer, Greg Teufel, said that the case is not over, however. He told The Epoch Times that the plaintiffs will file a separate petition for a writ of certiorari with a request to expedite the case in due course.

He said that there are two parts to the application: to prevent Act 77—the state law in question—from being used in future elections, and to also obtain relief for the 2020 election.