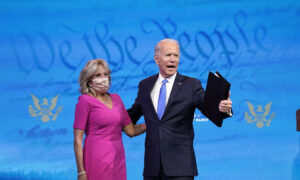 Former Vice President Joe Biden on Monday denied that voter fraud occurred in the 2020 election and claimed Electoral College victory not long after Republicans in seven battleground states entered dueling slates of electors to be sent to Congress.

Biden made the comments after Republicans in Pennsylvania, Michigan, Arizona, Georgia, Wisconsin, New Mexico, and Nevada entered dueling slates of electors. Democrats made the same move in Hawaii in 1960 by sending an alternate slate of electors for John F. Kennedy after the state’s governor certified Richard Nixon as the winner. Congress ultimately counted the Democrat electors.

Biden made no mention of the dueling electors in his speech. He called on President Donald Trump to concede the race and disputed that the election was tainted by fraud.

“Altogether, Vice President-elect Harris and I earned 306 electoral votes—well exceeding the 270 electoral votes needed to secure victory. 306 electoral votes is the same number of electoral votes Donald Trump and Mike Pence received in 2016. At that time, President Trump called his Electoral College tally a landslide. By his own standards, these numbers represented a clear victory then. And I respectfully suggest they do so now,” Biden said, according to a copy of his prepared remarks.

Since Election Day, Trump and third-party groups have pursued legal challenges to the outcome of the election in six states. None of the efforts have so far borne fruit, including an interstate Supreme Court challenge brought by Texas and backed by 19 Republican attorney generals.

Some of the lawsuits included allegations of widespread fraud, including through the manipulation of voting machines by Dominion Voting Systems. On Monday morning, a judge approved the release of a forensic audit of the Dominion machines from Antrim County, Michigan. The author of the report concluded that the machines were designed to produce an extraordinary volume of errors as a means for altering election outcomes. The machines were missing crucial security and ballot adjudication logs for the 2020 general election despite having the logs for prior years.

Biden said that election officials and volunteers, Republicans and Democrats alike, “knew the elections they oversaw were honest and free and fair.

“They saw it with their own eyes. And they wouldn’t be bullied into saying anything different,” Biden said.

“In America, when questions are raised about the legitimacy of any election, those questions are resolved through a legal process. And that is precisely what happened here. The Trump campaign brought dozens and dozens and dozens of legal challenges to test the results. They were heard. And they were found to be without merit,” the former vice president added.

Most of the post-election lawsuits have been dismissed for reasons other than the merits of the evidence. The Texas Supreme Court case was dropped because the Lone Star State could not establish adequate legal standing to bring the case. The court did not proceed to hear the evidence.

Biden pointed to the recounts in Georgia and Wisconsin to prove his point. He also touted his victory margins in Pennsylvania and Michigan.

“And yet none of this has stopped baseless claims about the legitimacy of the results,” Biden said.

“The integrity of our elections remains intact,” he added. “Now it is time to turn the page as we’ve done throughout our history.”

The dueling sets of electors from seven states will likely trigger a contested electoral vote count in Congress. Each slate of electors can be challenged with the approval of one member of the house and one senator. Both chambers of Congress would then retire to debate and vote on the slate.

Depending on the outcome of the Senate runoffs in Georgia, Trump would require near-unanimous support in the Senate to block the approval of Biden’s electors—a move that would send the election into uncharted territory.