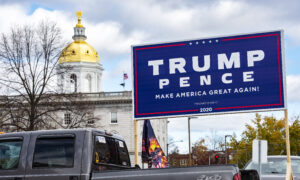 Republicans expanded their control of state legislatures in the 2020 election, flipping both chambers in one state while gaining more than 160 seats overall.

Their lead over Democrats thus increased to more than 700 (about 67 percent) from over 400 seats, although those numbers can still change with some remaining contests still to be decided.

State politics had long been a domain of Democrats until the 1990s, when they still controlled the southern states, including Texas, Tennessee, South Carolina, Mississippi, Louisiana, Kentucky, Georgia, Arkansas, and Alabama. That began to change in the late ’90s and early 2000s, and particularly in the 2010 midterms, when the GOP swept the field and flipped 21 chambers across 15 states, according to data from the National Conference of state Legislatures, a bipartisan association of state legislators (pdf).

Republicans further solidified their lead in the 2014 and 2016 elections, reaching a high of more than 4,200 legislators out of a total of some 7,400. Then, they started to lose ground.

The numbers can differ a bit depending on how independent and third-party candidates are counted. In this analysis, such candidates are counted separately, unless there’s evidence they openly identify or caucus with one or the other major party or won the election on a ticket of one of the parties.

The largest boost for Republicans occurred in New Hampshire, where a gain of 61 seats flipped control of both chambers to their side, while a major gain of 21 seats in West Virginia ensured GOP supermajorities in both chambers. Another pair of supermajorities came as a benefit of 15 and 10 more seats in Kentucky and Montana, respectively. A gain of 10 seats in Maine, however, wasn’t enough to overcome a strong Democrat majority.

Democrats made some advances of their own. They achieved gains in Connecticut (8 seats), Massachusetts (3 seats), California (2 seats), as well as Colorado and Virginia (both 1 seat).

But they made no advance or even lost ground in other blue states, including New York (lost 2 seats), Illinois (lost 1), Oregon (lost 1), as well as Washington and New Mexico (both no gain).

The balance of power has major consequences. States decide much of the policy that affects people’s daily lives, in areas such as education, law enforcement, health care, housing, and infrastructure. The differing approach to lockdown measures amid the CCP virus pandemic particularly highlights the importance of state government, although the measures were largely the result of executive actions by governors.

Furthermore, congressional district maps are largely decided by state legislators after each census. Democrats have blamed a part of their electoral failures on Republicans’ redrawing district boundaries to their advantage after the 2010 census; their bid to shift that power to themselves for the 2020 census fell short.

The results may still change as the campaign of President Donald Trump and several other groups challenge election results in several battleground states where Trump trails his opponent, former Vice President Joe Biden.

Trump has recently suggested the state-level success indicates something was amiss with the results of the presidential race.

“So I led this great charge, and I’m the only one that lost?” he said in a Nov. 29 tweet. “No, it doesn’t work that way. This was a massive fraud, a RIGGED ELECTION!”

While the campaign’s initial slew of lawsuits has been mostly rejected by the courts, the evidence of fraud and other irregularities has gradually been accumulating, putting the results in question.